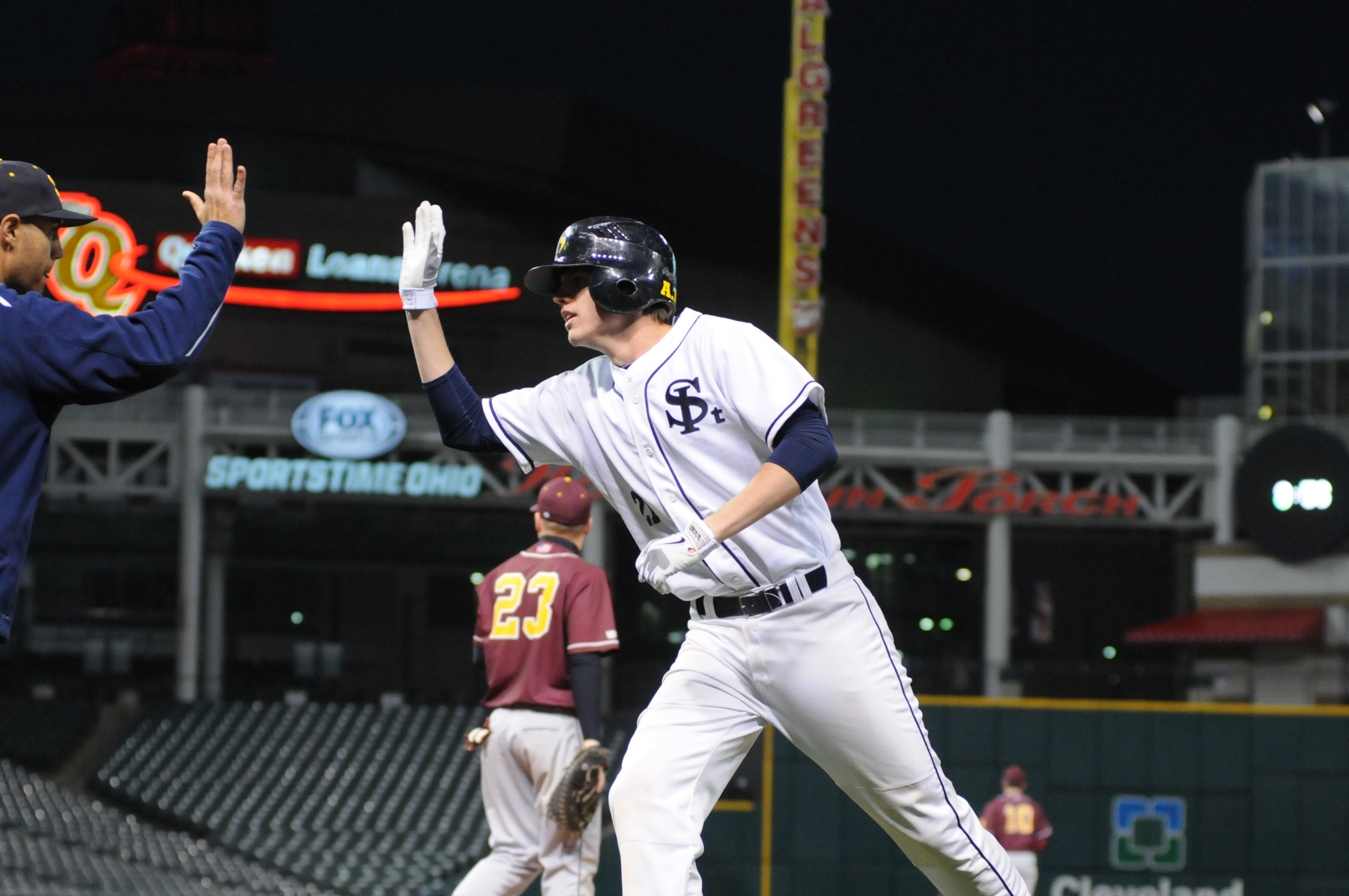 On a picture-perfect day in downtown Columbus, the Saint Ignatius Baseball team was not in any mood to be looking around Huntington Park for the final time. “Battle-tested” is what Coach Brad Ganor said about the state semifinal with Gahanna Lincoln, and he was absolutely correct with that. It was a game of answers, but Saint Ignatius never hung their heads. “It will take 1000 % focus tomorrow, but let’s enjoy this” said Coach Brad Ganor about the state title game with Moeller.

The Wildcats started off their state semifinal right where they left off in their 14-0 rout of Toledo Saint Francis in the Cleveland Regional Final. After a walk by Dan Rowbottom and a single by Tyler Finkler, Conor Hennessey came to the plate. Hennessey, who was being used to DH due to an elbow injury, showed that he has no wear and tear. He sent an RBI single into right to give Coach Ganor a sigh of relief and a 1-0 lead over the Lions. After an inning-ending double play, Tom Rolle came to the bump for the ‘Cats. “I fought. I did not have my best stuff, but you can’t stop fighting,” said Rolle. The lefty went four innings, having to work a hard-fought outing. Gahanna Lincoln found a way to answer the Wildcats in the bottom of the 1st on a throwing error as Zach Baumann. After one, things were knotted up. After a 1-2-3 top of the 2nd for Saint Ignatius, Gahanna Lincoln added another run on an RBI single by Peyton Ross, who has hit .333 on the season. But, Alec Tuohy could not get going throughout the afternoon. The star “Mr. Everything” for the Lions came in with a 9-2 record and a 2.44 ERA. He was knocked out after four innings as he walked two, which was, “so unlikely,” Lincoln fans cried out. In the 3rd, the Wildcats really got on Tuohy. Trailing 2-1, they answered again as Tyler Finkler and Conor Hennessey both reached on infield singles. After a strikeout, Nick Longo reached on an error as Finkler came in and then the clutch hits came. Both Cole Nieto and Shane Skuhrovec had RBI singles to give the Wildcats a 5-2 lead, as the intensity rose from the blue and gold fans.
The key gem came in the bottom of the 3rd, as Tom Rolle was in a little trouble. With one out, Christian Chiero doubled into the left-field corner. Alex Delp followed with a two-out single to left. As Chiero rounded third, Shane Skuhrovec picked up the ball, looked up, and fired a bullet. Alex Panstares went to his left and made a tremendous tag for the third out of the inning at the plate, saving a run.

But just when the vibe around Huntington Park was that Saint Ignatius was well on their way to win, the Lions would roar back. Tom Rolle walked the first two hitters of the inning, as Kyle Pluta came on in relief. Pluta threw strikes, but the very skillful Lions’ hitters were tough. Christian Chiero (hitting .414 coming into the game) ripped a RBI single into right. Clean-up hitter Alex Delp then drilled a RBI single that brought home a couple to tie the game at 5-5.

After five, Saint Ignatius was looking for their big shot. Shane Skuhrovec hit a seeing-eye single to center, as Quillen Austria followed by getting hit by a pitch from reliever Boomer Lowe. With one out, Dan Rowbottom stepped in. After drawing a 3-2 count, Rowbottom hit a high fly ball to right, and this one was carrying. At first, it looked like a dead pop-up, but it would not stop carrying. Zach Bauman kept on going back farther and farther in right for Gahanna Lincoln, but the ball flew over his head and skipped off the wall. Kyle Daugenti pinch-ran for Skuhrovec as he came home along with Austria, making it a 7-5 game.

Then, sophomore closer MJ Nara came on. Nara, who had woken up with a bit of an illness, was going through the fluids to get ready. He was more than ready. Nara walked two, but he did not surrender a hit. In the 7th, Nara gave up a lead-off walk, but he was not going to let anybody threaten anymore. Nara struck out red-hot Christian Chiero, then got Evan White to ground into a fielder’s choice. Alex Delp had a 1-2 count, and he could not touch the final pitch of the game. MJ, a sophomore, threw it to the glove of sophomore Alex Panstares for the final out. Celebration ensued as Saint Ignatius celebrated their first state title berth since 2008.

The SIBN will have full coverage of the State Championship beginning with pre-game at 2:30 tomorrow afternoon. First pitch is at 3 o’clock at beautiful Huntington Park. It’s the best $8 that you’ll spend, I assure you. Back to the beautiful Marriott Hotel for another night. Tomorrow will be my final day of coverage of Saint Ignatius Sports, and man what a ride it’s been.
On the last day of the sports season year at Saint Ignatius, the Wildcats will have a state title on the line. It doesn’t get much better than that. Congrats to the ‘Cats.

Previewing Cincinnati Moeller: The Crusaders absolutely exploded in a 13-1 win over Aurora in a State Semifinal. They have won six state titles and toppled Westlake in the 2012 Championship Game. Ken Griffey Jr., Barry Larkin, and Buddy Bell are just a few players who have come out of the powerhouse. They have won 18 straight games and have now outscored their opponents in the postseason, 75-7. Lead-off man and shortstop Riley Mahan, is hitting .376 and has 27 steals. Catcher Cameron Whitehead is batting .373 with 28 RBIs, as Justin Wampler is hitting .370 with 20 steals. Junior lefty Zach Logue will be on the hill, as let’s look at the pitching match-up. Logue is a star, as he has a .436 average and 23 RBIs.

The stage is set for the Division I State Title Game in the state capitol!