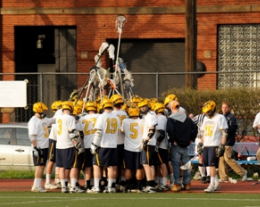 WOOSTER – Coming off the bus, Saint Ignatius Head Coach Pat McManamon said, “We like being a loose group, and I like the fact that we’re under the radar, at least I think we’re a team like that. These guys have put Saint Ignatius Lacrosse back on the map.” Although Coach was only speaking to me in the pre-game interview, he uttered the same words on the postseason ride home. And although that meant that the season had come to an end for Saint Ignatius, the Wildcats were not hanging their heads. After a 2-2 tie at halftime, the tight defense of Dublin Jerome prevailed, driving the Celtics to a 6-3 victory in their state semifinal affair.

The Wildcats started off the game in a very similar way to Saturday’s 11-10 dramatic Regional Final victory over Hudson. After both teams began to just get a feel for the game throughout the first eight and a half minutes, it was an All American who came alive. Michigan bound Garrett Joseph ripped in a goal (3:30 in the 1st quarter) for the Wildcats to give them a 1-0 lead. After a nice stop by CJ Haag on Chris Haimbaugh’s shot with two minutes to go, star junior Mikey Bano found the back of the net to even the game. At the end of the opening quarter, it was 1-1. Bano is an All-Region Team member and he still has a senior year ahead of him for the Celtics.

Dublin Jerome would get the first word in the 2nd quarter, as Ian Brin bounced a shot through for a goal with 6:22 in the opening half. The Wildcats would answer though, as senior Danny Hennessy stepped up to the challenging Celtics and ripped a goal in with 2:56 in the 2nd quarter. Although it was a tie game at the half, the pace was in favor of the gritty Celtics. They held the majority of possession in the first half, as they kept looking to see what they could do to get the Wildcat defense to bite. Well, in the second half, they found a way to draw the Wildcats to an over-aggressive state, which led to some sloppiness.

The Celtics set the tone in the second half as Tanner Barco ripped a man-up goal into the back of the net with 9:09 in the 3rd quarter. Dublin Jerome took a 3-2 lead, but not for long. Mike Avdey answered the Celtics with a goal with 7:40 left in the 3rd. Who would have known that Avdey’s goal was the final in the season. “When you only give up six goals, you’re going to have a shot in almost any game. We could not find much leeway offensively, and that’s that,” said Coach McManamon.

Chris Haimbaugh scored with 5:25 in the 3rd quarter, as he then opened the 4th with a goal to give the Celtics a two-goal lead with 9:05 in the game. Mikey Bano put the exclamation point on for Dublin Jerome, as he scored with 7:36 in regulation.

Saint Ignatius ended up with a few shots down the stretch, but the Celtics’ defense was all over the place, which made the ‘Cats uncomfortable. Nothing came easy, and rightly so in a state semifinals.

Getting on the bus on the way home, I realized once again how special the seniors on this team were. Garrett Joseph, Danny Hennessy, and Mike Avdey scored the goals that kept Saint Ignatius in the game on Wednesday night. Defender Joe Cillo was nothing short of excellent, and he will greatly be missed for his hard work and passion. Goalie CJ Hagg walked off in tears, but his career in athletics at Wildcat High has been terrific. Mike Mulach contributed to the ‘Cats in big times and Jimmy Wilhelm came back from injury and added energy. Connor Kitko was very special for this 2013 team, as he made several big plays in the midfield and posed his length to defenses. John Leone posed challenges with his quickness and Nick Chapek was a stellar defender. Finally, Bryan Fisher, need we say more? What a testament of what it means to be dedicated to the good of athletics.