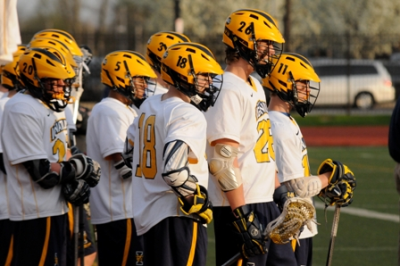 Coming off one of the greatest wins in program history in their Regional Final, Coach Pat McManamon ’95 and his Saint Ignatius Wildcat Lacrosse Team are ready to take the trip down to the College of Wooster.

On Saturday, it was Mike Vitale’s four-goal afternoon, All American Joe Cillo’s stifling defense, and CJ Haag’s goal tending that edged Saint Ignatius to a Regional Championship victory in Hudson over the Explorers, 11-10. The Wildcats had huge performances in the clutch from All American Garrett Joseph, Jake Maruna, Mike Avdey, and his twin brothers, Matt and Steve.

The depth has definitely been present for this team, but I look at the fact that many of the guys on this Wildcat lacrosse team have seen big-game atmospheres heading into this State Semifinal against Dublin Jerome. CJ Haag, Bryan Fisher, Nick Chapek, Brian Hartnett, Mike Vitale, and Mike Siragusa all had some sort of experience back in the fall of 2011, when Saint Ignatius won its 11th state football championship. You can see the grit and toughness in the eyes of the Wildcats now. On top of that, Head Coach Pat McManamon knows what Wednesday’s night experience is like for a player, as does his staff. Back in 1995, the ‘Cats made it to the Final Four, and although they fell, Coach is looking to do more than ’95 now.

On Saturday, the Wildcats were a man down entering the final minute of the Regional Final against Hudson, but CJ Haag’s big choice to go after the ball behind the Wildcats’ goal ended up being the true teller of the afternoon. All American Joe Cillo stepped up with key defense late and the ‘Cats found a way. They’re going to need that same defense tonight.

Moving Vitale to attack has paid off for McManamon

He’ll be a key running back in the fall for Saint Ignatius football, but right now his speed is key on the lacrosse field. Mike Vitale has transitioned into attack mode and his four-goal performance shows that Coach Pat McManamon knows what he’s doing. Vitale poses such a unique test to defenses not just because of his natural speed, but because of his smart footwork.

Standing at 15-6 and sixth in the laxpower.com state poll, the Celtics live by their name. They are tough and physical defensively, as they come off a 9-2 rout over Olentangy Liberty in their Regional Championship. The offense is driven by junior midfielder Mikey Bano, who had five goals last Saturday. Lucas Brush is a stout defender, as he vacuumed up seven ground balls on Saturday. Goalie Austin Paalz had eight saves.

Ironically enough, CJ Haag only had saves for Saint Ignatius on Saturday, but every one was huge.

So, Wednesday night at 7:30, the massive week in Wildcat athletics begins. The game will be on with live video on the Saint Ignatius Broadcasting Network. Tune in for all the action beginning at 7 in Wooster.