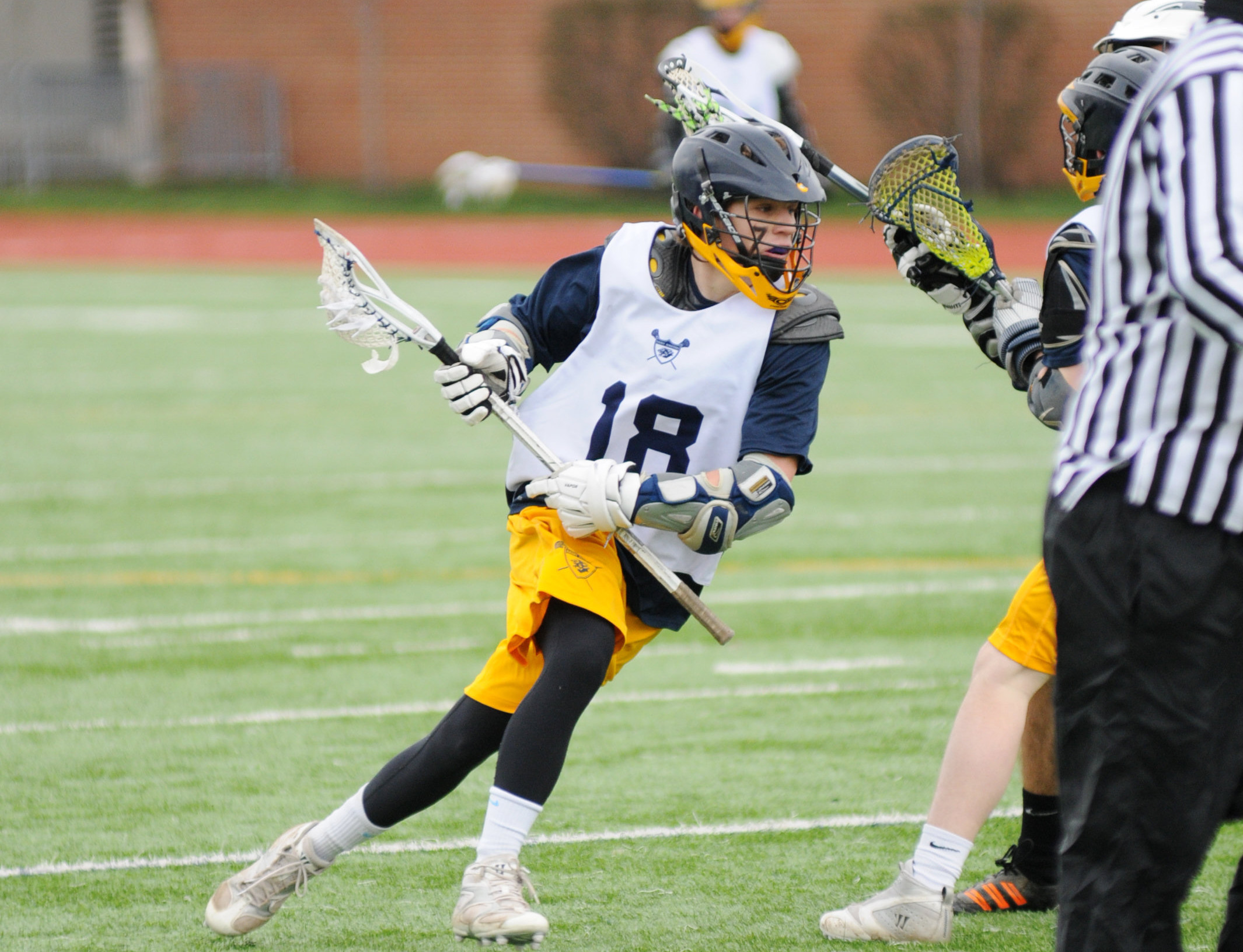 HUDSON – On an overcast, humid afternoon, Coach Pat McManamon was looking to put Saint Ignatius Lacrosse back to a place that they had not been in since 1995, when Coach McManamon was a junior at Wildcat High. But, staring him in the face was the team who handed the Wildcats their only loss of the season, Hudson (April 24, 17-11 final score). As beautiful Memorial Stadium filled up, the intensity rose. Playing in a tough atmosphere, Saint Ignatius set the tone early, and finished with a defensive stand to edge the Explorers, 11-10, and advance to a State Semifinal match-up on Wednesday at the College of Wooster against Dublin Jerome.

The first few minutes of the game were used by both teams as moments for each team to get a feel for the Regional Final atmosphere, but then a junior, who also uses his skills on the football field, stepped up. With 6:29 in the 1st quarter, Jake Maruna ripped one into the back of the net to put the Wildcats on the board. It would not take long for the Explorers to answer in a first half that saw a lot of defense. Attacker Bo Lori, who came into the game with 71 goals on his season, tacked up a goal for Hudson to knot the game up with 4:44 in the 1st. Lori is heading to Lehigh University in the fall of 2014, as he is only a junior. Defense led most of the first half, as CJ Haag came up with big save after big save.

After a quarter, it was a tie game at 1-1. Then, the Wildcats’ offensive star of the game came alive and broke the 2nd-quarter ice. Mike Vitale ripped a shot that hit into the nylon to put Saint Ignatius ahead. But not even two minutes later, Mike Mougey sneaked one past CJ Haag to tie it up again at 2-2. The final three minutes of the 1st half offered opportunities, as Hudson was knocking on the door, but neither team could salvage any more offense. Adjustment time came at the half, as the game molded itself into a completely different feel. The tough defense of Hudson had been prevailing, but Saint Ignatius posed an offensive challenge to the Explorers with their speed and mentality. The same man who kept setting the tone all day, Mike Vitale, showed that his speed as a running back can help in lacrosse, as he was assisted by senior Danny Hennessy to put the ‘Cats on top, 3-2 with 10:12 in the 3rd quarter.

Separation began to take place as confidence was in favor of the Wildcats. “Offensively, we were trying to make Hudson work for every takeaway they could get. We wanted to just keep shooting. As I always think, you can never take a shot for granted,” said Senior All-American Joe Cillo of the Wildcats.

With 7:38 in the 3rd quarter remaining, Mike Avdey kept the production going with a big goal to put Saint Ignatius ahead by two. And then, with 4:19 to go, Mike was actually outdone. Out of all people, it was one of his twin brothers, Steve, who fired the goal of the game with his lefty swing to put Saint Ignatius on top, 5-2 with 4:19 in the 3rd.

In a game that saw answers though, it would only take just over a minute for things to change. Zach Vehar scored two consecutive goals as the Explorers cut their deficit to 5-4 with 3:16 in the 3rd. All-American Garrett Joseph scored with 3:08 in the 3rd to answer Vehar, though, as Saint Ignatius led 6-4 after three entertaining quarters.

The 4th would not disappoint.

Adam Coberly (Hudson) and Jake Maruna (Saint Ignatius) traded goals to start, but then Bo Lori and Zach Vehar came alive again. The two hit on goals to tie the game at 7-7, with just over 10 minutes in regulation. Once again, Mike Vitale would break the ice. With 8:08 to go in the game, Saint Ignatius led 8-7 behind another goal from the quick-paced Vitale.

His goal led to Danny Hennessy’s big shot into the back of the net to give Saint Ignatius a 9-7 lead over Hudson with 5:42 left. After Hudson’s Zach Nye scored for Hudson, Vitale kept on trudging ahead. He added his 4th goal of the day with 3:58 to go in the game, as then Mike Avdey followed with another with 2:38 to go. Hudson was against the wall, as the Explorers trailed 11-8. Then, the very lively Hudson faithful stood up and got rowdy. Zach Vehar put in a goal, as Hudson cut the deficit to 11-9 with 2:18 left. Then, guess what? Vehar continued to try to be Vitale as he put on another goal with 2:01 left in the game.

It was 11-10, and with two minutes remaining, Memorial Stadium turned into the sound of fans on the edges of their seats, just sitting and watching until the final second goes. Down a man, Saint Ignatius would have to finish regulation with the power of their tight-knit, undermanned “D” and their senior goalie, CJ Haag. The seconds ran down, tick-by-tick, and then the ball flew into the air and blue and gold shirts fled onto the 50-yard line. Saint Ignatius has clinched their first state semifinal berth since 1995. “It is such an unbelievable moment for the program.  Wow. We’re going to the Final Four, and it’s surreal right now, but I could not think of a better way to end senior year,” said Cillo. “Wahoo!” was all Mike Vitale was chanting. The ‘Cats are roaring to their state semifinal showdown with Dublin Jerome (who topped Olentangy, 9-2, on Saturday) on Wednesday at 7 pm.

What a wild one, and a big congrats goes to Pat McManamon’s program. They will have a June to remember.