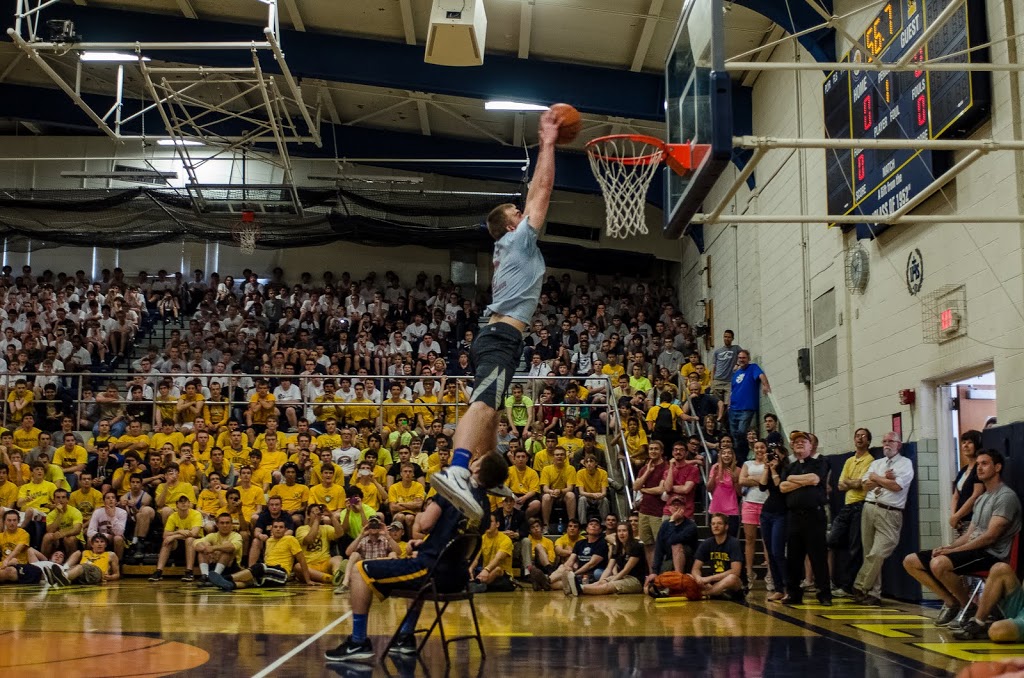 Brainchild of Dan Hess ‘88 was two years in the making

Apprehension spanned the student body when Mr. Hess unveiled the Class Competition Day plan this past August. Accompanied by an unpopular stigma from the first year of the class competition in the 2011-2012 school year, many students were unsure of this ambiguous day that was at that point only an idealized vision in Mr. Hess’s mind. Mixed feelings arose: some students took an optimistic view, while others condemned it without even giving it decent consideration. Some said, “Hey, it’s better than classes and it might actually be fun,” while the doubters said, “This is stupid, I don’t even want to show up that day.”

But no one was stopping Mr. Hess from going through with his plans and making this ambitious fantasy into a fantastic reality.

After endless planning, very meticulous detailing, and countless hours of working, Mr. Hess, with the help of a wide range of people, pulled off what was acclaimed by students, faculty, staff, and administration to be a wild success. He silenced the critics, gave the students a day of blissful fun, and most likely started a tradition to be kept and cherished for decades to come.

The day started off on a wonderful note with mass celebrated by Fr. Pribyl, who’s only been at Ignatius for a semester; yet if someone from outside of the school attended, it would seem Fr. Pribyl was one of the beloved Jesuits who have been trademarks to the school.

Throughout the mass he exuded energy for the day and used the excitement of the day to capture the attention of the students which otherwise might have been wandering off into many thoughts, none of which would involve God. He involved the students, rousing cheers and even receiving an unheard of round of applause after his powerful homily in which he missioned the students to be the face of God to others. Rather than being a dreadful task that the students felt was just a roadblock to the day, Father Pribyl made it a great prelude to the following festivities.

Then after a short stay in homeroom the roughly 75 games commenced and Mr. Hess’s long awaited, exhaustingly planned dream had been fulfilled. Once the competitions began all the doubt among the student body quickly dissolved. One would have a painstakingly difficult time finding someone not having a good time. There was literally something for everyone: sports competitions for the athletes (and the wannabes), trivia for the fact enthusiasts, Batman for the movie lovers, xbox and wii tournaments for the gamers, a jam session for the rockers, even a study hall for the dedicated students, and everything in between. And those not inclined to do any activities enjoyed a day of simple relaxation in the beautiful summer-like weather.

As the games wound down and people were getting ready to check back into homeroom before the rally, students from all grades started to congregate in the mall and reminisce on the day and excitingly recount their highlights. “It was raw!” Greg Miller ‘15 said about the day. And when people thought the day couldn’t get any better, the game closings began.

As students and faculty piled into the gymnasium, people didn’t know what to expect; some grumbled for having to spend two more hours of their day which they could have spent out of school early. But by 2:30 no one would want to take away that final time of the day spent in the gym. The closing ceremonies were laden with amazing memories: David Black ‘14 getting a perfect score after dunking over Steve McDonnell ‘14, Jack O’Brien cracking up the student body with his Mr. Popelka impersonation and almost bringing the real Joe Popelka to tears of laughter, the senior class singing the Alma Mater with their arms around each other’s shoulders, and many more.

At the end of the day, after everyone left the gymnasium, except for some students and a few teachers helping clean up, Mr. Hess stood proudly next to the wildcat trophy, taking in the huge success of a day it was. What was once a figment of his imagination turned into an incredible day of fun and brotherhood which hopefully will become a hallowed tradition for years to come.