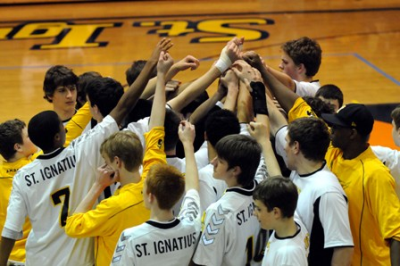 Spring is here and the Saint Ignatius volleyball team is ready for another impressive season.  Last year the team made it all the way to the elite eight in the State Tournament, but is hungry this year for more.  Head Coach Casey Marcello is in his sixth year at Saint Ignatius and has set his sights on getting his team to the final four in the state tournament.  With a team full of experience, he knows that there is nothing that they can’t handle.

The depth of this years’ team is incredible.  With eleven seniors, three juniors, and one sophomore, court experience is something they have in their favor.  Coach Marcello said, “With so many seniors playing at such a high level of volleyball and one of the tallest teams in the state, this team is going to be very special.”  He credits the substitutes for pushing the starters so hard during practice.  Having a competitive atmosphere at practice is a big deal, and prepares the team to push themselves to the limit, similar to a game scenario.

With great depth comes great players, and there are a few impact players that stick out when they’re on the court.  Senior setter Ian McKenna resembles the quarterback of the team.  With it being his third year on varsity, he knows his teammates well and is the motor of the offense.  One of McKenna’s best weapons is senior outside hitter Jeff Granger.  Jeff has played on the national level on many occasions and is one of the top outside hitters in the state.  The big man on the court is senior middle hitter Mike Robertson.  He has a huge presence on the court, being one of the best blockers on the team. His chemistry with McKenna can lead to exciting surprise plays when the opposition is least expecting it.

When asked about the strengths of the team, Coach Marcello responded saying “We can block anyone in the state.  With a solid front row, we are a forced to be reckoned with when hitting and blocking the ball.”  He also said that the team has four players that have played for Junior Nationals, and with plenty of other players playing club volleyball around the city of Cleveland, the extra reps can carry this team.  With so many starters playing at the national level, they know what it takes to compete against some of the best teams in the nation.

With great depth and even better experience, this team has the ability to make a run to remember.