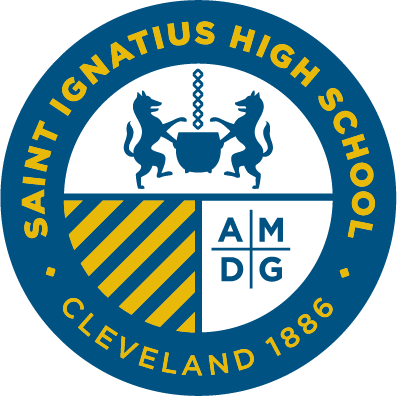 As most students are already aware, the seals and symbols of  Saint Ignatius  have a new look.  Rumors of a new logo were confirmed Monday night after students came across the new record boards which replaced the outdated ones in Hall of Fame. The logo, which has a new depiction of the Wildcat in front of the ‘I,’ is pictured on the boards and quickly spread to the students through social media.    The reaction was largely negative, and the change became the talk of the school on Tuesday.

“The idea behind the logo change is to get a unified symbol of who we are,” said Lisa Metro, Director of Communications, when I sat down to talk with her about the recent chatter.

The decision to revise the school’s logos began in 2012, when the school finalized its most recent 5-year Strategic Plan. Part of that plan called for a branding platform that includes a central focus on Ignatian and Catholic identity. The communications department and Fr. Murphy were called upon to establish a unified voice for Saint Ignatius that communicates the school’s unique strengths, and to bring order to the visual identity of the school.  And so, the process began.

The first move was to try and find a full service branding agency that would best suit our needs.  Several agencies responded to a Request for Proposal and Twist Creative, a local firm which is across the street from Wasmer Field, understood the Catholic component of the brand strategy and design, as well as our role in Ohio City. They previously designed identity systems for the Sisters of Charity Health System as well as Ohio City, Inc.    based on the strength of their design work, and their previous involvement with Catholic institutions, they were hired.

Twist Creative came to Saint Ignatius and held “discovery sessions” with teachers, alumni, coaches, and other administrators to try and understand what the Ignatius community is all about. They asked questions to bring out the identity of the school, and they asked the people at these sessions questions like, “what do you like most about Saint Ignatius?” There was much positive feedback and good answers, but one answer was unanimous and resounding: A.M.D.G. Twist Creative took what was discussed in these sessions and formed the logos accordingly.

The new logos were created to be timeless, original, and reflective of our traditions and beliefs. They were discussed between the communications office and Twist Creative.   Ms. Metro and her team decided on the logos with Father Murphy agreeing 100 percent. The changes are being made for the future of the school, and the decided logos are set in stone.

The first of these logos, called the “official logo” or seal (pictured above or linked here for mobile readers), has the Loyola family crest and the wolves with the pot.   While it is quite different, compared to the old logo, it maintains many of the core characteristics. This will be used as the official school logo, and will represent Ignatius as the outside symbol. “Any official school event will have this logo,” Ms. Metro said. This logo should replace everything that the old logo occupied, but these changes will happen gradually over time. It does not make financial sense to remove the new piece of the mall where the old seal is, and replace it with the new one. If you look around, the old seal is everywhere, and it is going to take a long time to make these changes.

The second logo is being called the “Ignatius shield,” or “shield” for short. It has much of the same characteristics as the official logo, and it symbolizes the tradition of the school. This logo will be used as the internal symbol with sports groups such as soccer and extracurricular groups such as the Pallbearers. Both the seal and the shield incorporate the phrase Ad Majorem Dei Gloriam through its acronym, A.M.D.G.

One of the minor logos that will make a huge impact on campus is the new A.M.D.G. logo. It has been uniquely designed to be original to our school, and this logo will appear on many items in the bookstore, as well as sports items.

The change that has sparked the greatest interest–and ire–of many students, is the new Wildcat. After careful consideration, the decision for this logo was made by Ms. Metro and the communications department, with the support of  Father Murphy backed it.  Along with Father’s support, Ms. Metro also said she received good reviews from a few students, faculty members, coaches, and Principal Bradesca. However, the students have been notoriously deriding this logo on social media and in school.

The difference between this new logo and the old Wildcat logo is the wildcat itself. Students who do not like the new logo claim that the icon does resemble a wildcat anymore. Members of the student body have expressed frustration that they had no say in the decision of the new logo, and say they felt that their opinions were not valued. Ms. Metro did not want the picking of the Wildcat logo to be a popularity contest because no matter what logo would be the most popular, there would still be students who would either like or dislike it. Logo selection is about more than just “like” or “dislike.” In picking the logo, Ms. Metro reflected on which wildcat would seem more collegiate and which one would be timeless. In being timeless, the desired wildcat should be popular now and continue to be popular in the future.

For those who are worried that this logo will be taking over all sports teams, do not be afraid. The communications office has had meetings with coaches and the athletic director, and together they will decide which logos they want to use for their team. Each coach has several logos to choose from, as well as the overall design of team’s new uniforms. The changes to the uniforms may not happen all at once, but coaches are eager to get their teams’ new gear. The communications department is not forcing the teams to change their uniforms as soon as possible, and they are also not telling the coaches precisely which symbols they have to use, although they have to pick from the ones that are provided to them.

One of the rumors that spread fast was that the paw print on the football helmets would be replaced by the Wildcat and the ‘I.’ This is not the case. The Communications Department talked to Coach Kyle and Ms. Metro simply stated, “we value him.” Although no coach got precedence over what they wanted for their teams, it was decided that the wildcat paw print would only be used for football. The uniqueness of the situation and the tradition of the team was the reason for this decision. Twist Creative did make minor changes to the paw print, but it is hardly recognizable by the un- trained eye.

The difficultly with anything new is the opposition to change. As the new logos start to replace the old ones, the hardest part will be to adapt. These logos are pretty much set in stone, and the school has spent quite a bit of time and money to create these new designs. Hopefully the decisions made for the choosing of these logos will reflect the tradition, beliefs, and character of the school. These symbols for our school will be important for the future, and will be part of Saint Ignatius for a long time.