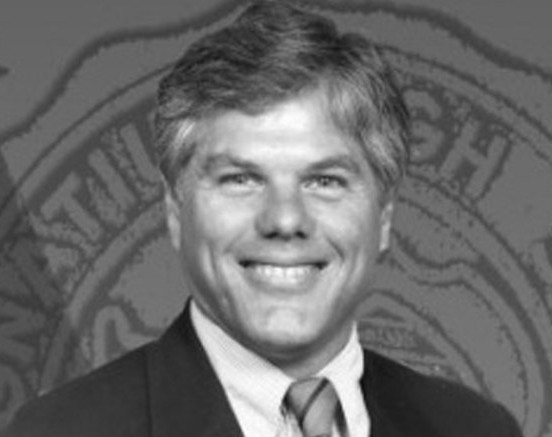 He was a scholar.   I can attest to that.   For several years Dr. Greg Knittel and I rode into Saint Ignatius together from the West Side.   Our car pool originally had four faculty members in it, but after two of them left the school only Greg and I remained.   We each had crummy cars.   Mine wouldn’t go in reverse unless I got under the car and fiddled with the gears.   His windshield wipers wouldn’t work, so I would sometimes reach around the door frame to push the one on the shotgun side.   We sailed along I-90 that way often lost in intellectual conversation.   Greg, who died on February 5th after a long struggle against ALS, was a treasure house of linguistic information, and when he talked I learned.   He was concerned about the erosion of the English language, and I tried to contribute my share to conversations about that topic.  I was always hopelessly outclassed.   He talked about such things with the same evident enthusiasm he had for the soccer program, which he had begun.   He somehow seemed to be able to summon enthusiasm for whatever he was involved in.

Once I was teaching my Freshman students about illuminated medieval manuscripts.   My wife and I owned several pages from such books, and I had them in my classroom hanging above the front board so that the students could see what they looked like.   Greg was on our floor at the time, and he stopped in to say hello as I was eating my lunch.   But his attention was diverted to the manuscripts.   Suddenly he was fixating on a song sheet from late 15th century Bavaria.   It was in Latin, and Greg was translating it faster than I can read English.   He even pointed out what he said were ligatures that indicated missing syllables, and he knew what the missing syllables were.   I remember that.   I know about ligatures now.   What am I doing knowing that kind of stuff?    It’s because my friend was Greg Knittel, and he was teaching me once again.

For years he served as the chair of the Classical Language Department, and under him Latin and Greek formed probably the most robust Classics program in the United States, high school or college.   He later earned his PhD, served as Dean of Teachers, and found time to coach in the soccer program he had initiated.   Mr. Mike McLaughlin, current soccer coach, played for Greg and served as an assistant coach under him.   “He loved the game,” says Mike.   “He also loved helping student athletes to do their best.   He taught me that every day was a battle, and he continued to teach me that for the rest of his life, especially at the end.”

Greg’s biggest contribution to teaching came indeed when he was in his long, protracted process of dying.   His disease was a particularly insidious one, robbing him first of his perfect diction, then his coordination, later rendering him no longer ambulatory.   Finally, he couldn’t move at all.   Only his eyes seemed to work.   Oh, and his smile.   ALS couldn’t get that away from him.   Even when he couldn’t talk it was evident that he was still listening, still taking in ideas.   He was teaching everyone around him that even when the quality of life has been compromised, there is still a reason to hang onto it.   And how he hung on!

So, he’s gone now.   When a much older person dies it’s customary to talk about a long life lived well.   In Greg’s case it was an all too short life lived enthusiastically.   If you wanted to know how much he affected those close to him all you had to do was to see how his family and friends hovered over him as he lay immobile on his bed.   They carried on discussions to give him something to listen to.   They talked, and he remained silent, fighting just to stay alive.   They talked, and he taught.   Without the ability to utter a single word.   Now, that was a teacher!