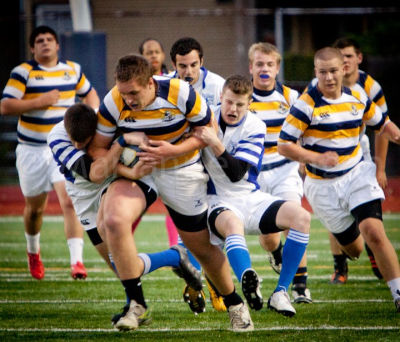 On November 30’s Winter sports rally, the most electrifying news came from our school’s new spring sport, rugby. Rugby coach Mr. Dan Arbeznik ’00 announced that Saint Ignatius rugby was now an official school-sanctioned sport. Some students likely thought that rugby was already sanctioned, but there were previously concerns regarding the viability of labeling rugby as one of our sports.

Initially, the school was troubled because of the availability of fields, as Saint Ignatius already has six varsity spring sports–baseball, crew, lacrosse, tennis, track, and volleyball–that require significant practice time themselves. However, thanks to the hard work by Assistant Athletic Director Mr. Sean O’ Toole ’87 and Athletic Director Mr. Rory Fitzpatrick ’88 who conscientiously juggled schedules, sufficient gym and field space were procured for the rugby team. Mr. Arbeznik said that the fields across from Lorain, as soon as they are turfed, will be a possibility for rugby use.

Another question concerned how much interest there would be in the team. The other six varsity teams have some of our school’s finest athletes. Yet according to Mr. Arbeznik, 142 Ignatius students played in the different levels of rugby teams last year. The entire program consists of several different teams: two varsity, two junior varsity, a freshman team, and developmental team.

As members of an official school-sanctioned team, rugby players may now feel a higher sense of camaraderie and representation within the school, and their experiences will now be linked more significantly with their high school experience, according to Mr. Arbeznik. As for this season, the team has a difficult schedule, facing off against previous state champions such as St. Edward, Westerville, and Moeller, as well as national champions Gonzaga from Washington, D.C., and Xavier from Manhattan. Despite the tough competition, Mr. Arbeznik is \”excited”