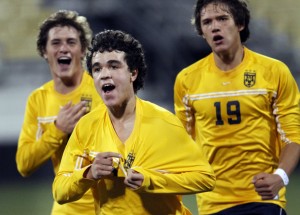 Coach Mike McLaughlin’s defending state champions will face the Copley Indians Tuesday (tomorrow) in a Division I state semifinal at Nordonia. The starting time is 7 p.m.

Saint Ignatius (20-1) enters the semifinals on a 15-game winning streak. The Wildcats, who have won 43 of their past 44 games, are seeking their third state championship in four seasons and what would be a record fifth boys’ state title in Ohio soccer.

Saint Ignatius has won three consecutive games in Golden Goal overtime – a 1-0, double-overtime victory over St. Edward in the district finals, a 1-0 overtime triumph over Massillon Jackson in the regional semifinals and a 2-1 Golden Goal thriller over Mayfield in Saturday’s regional title game at Rocky River.

Copley (15-2-4) advanced to the final four by defeating Toledo St. John’s Jesuit, 3-2, in Saturday’s regional final at Bay. Counting ties, the Indians are unbeaten in 16 consecutive matches. Copley jumped out to a 3-0 lead against St. John’s. The Titans closed to 3-2 by halftime, but the Indians’ defense stood tall over the final 40 minutes.

Coach Dave Antal’s team played most of the match against St. John’s down a player because of a red card. Copley was the Class A-AA state runner-up in 1984 and the Division II state champion in 1994. Coach Antal was a member of that ’94 team.

Saint Ignatius has not lost to an Ohio team since the 1-0 shoot-out setback to Gahanna Lincoln in the 2009 big-school state championship game. En route to state and national championships last season, the Wildcats were 23-0 and their only loss this season came over Labor Day Weekend to Louisville (KY) St. Xavier, 2-0 on Wasmer Field.