On May 1, 2011, a team of Navy Seals stormed a compound in Abbottabad, Pakistan. During the raid, Osama Bin Laden, the mastermind of the September 11th terrorist attacks was killed along with four others living in the highly secured building.  As news of Bin Laden’s death broke, impromptu celebrations broke out in the streets of New York, in front of the White House, and on college campuses throughout the nation. In most cases, the scene looked more like a Super Bowl celebration, punctuated by chants of U-S-A, U-S-A !! 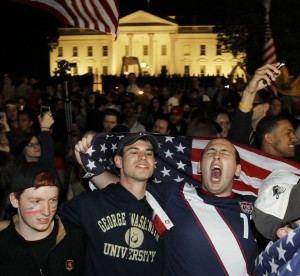 The response didn’t sit well with some Ignatius, notably junior Max Buck, who fired off an email to all students with the subject line: I’M ANGRY. As Buck’s email missive declared, Bin Laden’s death was a good and necessary thing, but \”the celebration over the death of a fellow human is not at all acceptable.”

At the End of the Day, Interests Outweigh Values in Foreign Policy