Bonjour! On March 8, French Club members welcomed three Cleveland stars who are native to the French language. Cleveland Cavaliers’ Christian Eyenga, Lake Erie Monsters’ Patrick Bordeleau, and Cavaliers’/Monsters’ announcer Olivier Sedra stopped by to share French culture and language. Eyenga and Bordeleau arrived around 3:30, were introduced, and then took turns reading to the group in French (with the help of a few French Club members). After the stories were read, the floor was opened for a question and answer session.

Eyenga, a native of the Congo, shared his views on Cleveland; \”I think Cleveland is great. It is a very different city, as I was in Barcelona last year.” 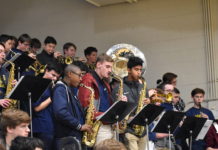