We are all beginners.

As I began to slow down, I looked to the huge Native American standing tall as if he were guarding Carnegie Bridge. I stopped momentarily to try to catch my breath. Then I continued to run, knowing it would be over soon. That was my first Bridge run, my first 5-kilometer run, and my first crew practice.  No warm fuzzy welcome for us, just a command. Run! I had heard rumors that it would be like this: difficult. Next practice, I looked around and noticed that there was a significant drop in the number of people attending. I later learned that we lost around 11 people within the first few days. 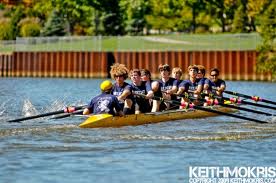 As the days passed, I began to learn names and personalities. I didn’t know it then but these teammates of mine would grow to be my new family. My brothers.

We novices ran to practice every day and did it like we did everything else, together. The running boards made sure of that. These are planks of wood roped together with handles on them that we would hold as we ran down to the real practice. When we get to the boathouse, we go through the daily routine. Each practice brought new challenges.  It became very clear that nothing came for free. We had to work for everything. There is really no luck in crew and that is why it is so different than anything else that I have ever done. There is no chance of success if you don’t work for it. Revco’s Bridge Runs, Wildcat Warm-ups; these terms became part of our vocabulary, and part of our plan for success.

None of us really knew what to expect for the first regatta. It was an incredible experience, and we saw first-hand the results of our work.  Our freshman 8’s claimed gold and bronze.  The more memorable of these first races was at St. Mary’s in Michigan. We had rowed in the cold and in the rain before, but nothing like this. The sleet and rain were so blinding the officials were even thinking of calling it off, but we rowed on. When we came off the water we were all completely drenched and freezing, but this was just another moment that brought us closer together.

Now its winter, and with that comes frozen water, 5:45am practices, and stairs. There are 6 floors of them. Waking up that early isn’t that bad, until you realize you have an entire school day ahead of you. I would be lying if I said I never dozed off during that first week. You get used to them though, or at least as used to getting up at 4:30 as possible. But in just a month or two, we will be back to normal, back to the boathouse, rowing once again. Remember, above all, \”The Glory is in the Team”