For over 20 years St. Ignatius High School has been sending students to St. Herman’s House of Hospitality. Founded on September 27, 1977 by Mother Mary Blossom and Father Gregory C. Reynolds, the goal of this Russian Orthodox monastery is to provide food, clothing, and shelter in a safe alcohol and drug free environment to the needy of the Greater Cleveland area. This homeless shelter on Franklin Boulevard has provided an average of 70,000 meals, 1,800 showers, and overnight accommodations for over 11,800 men each year. St. Herman’s also gives out nearly 80,000 food bags of eggs, milk, meat, juice, and bread to over 1,300 mothers and children. This semester, I have had the honor of performing my duties of Sophomore Service at this house.

Once a week, I leave school with fellow students for 4 periods to help out at this extraordinary place. A majority of my time there is spent preparing meals for the lunch hour, often times making peanut butter and jelly sandwiches, cutting vegetables, and tossing salads. Cleaning the house by dusting furniture, raking leaves, and washing the picnic tables are also among some of the common household tasks we do. Several times we have carried boxes of donations ranging from food to clothing, much of it coming from local supermarkets and charities. One sight that caught me by surprise was that St. Herman’s wanted us to help load clothes into an Easter Seals truck. This showed how even while accepting donations of their own, they are generous enough to pass on to other charities clothes that they don’t need. 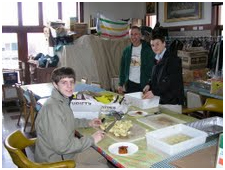 One day they invited us to take a break from our chores and join them in a service said by Father Vladimir Ivanov. It was an interesting experience to watch volunteers, priests, and the guests all come together for an hour to celebrate an Orthodox mass with Father Vladimir.  The guests at St. Herman’s House of Hospitality are more than grateful for our help. I have had many conversations with the people we often see walking on the streets, many of whom regularly stop by to watch our athletic teams’ practices. I am getting to know these people whom we often ignore as we walk downtown, and realizing whom these men and women are and hearing their stories. In one conversation, a man walking past saw the trademark St. Ignatius shirt and tie, looked at me and asked, \”You boys are from that school down the street, uh that St. Ignatius, right?”